The pistes are spread among all four of the peaks which enclose a lake at the middle of the pass. Opposite slopes are connected by the Lake Taxi, which tows skiers across the frozen surface from one side to the other. The highest piste starts at 2205m on the eastern slope of Kornock in a colourful tangle of red lines which begin by following a broad ridge and then lead down into a valley, weaving across a slightly undulating terrain. One of the tracks is modelled in the spirit of Freestyle with waves, small jumps and banked corners. There is a snowpark In the middle part of the slope with tracks at all difficulty levels. The Kornock slope is served by a comfortable, heated, 6-seat chair-lift. From the southern edge of the pass, the Panorama lift, with a combination of 6-seater chairs and and eight seater cabins, carries you up to serpentine red runs and the adrenaline Nocky Flitzer bobsleigh switch-back, whose rail sometimes runs several meters above the ground. Just by the lake, there is a training area with several lifts, including the legendary Engländerliftu – the first lift to Turracher Höhe, and built solely for teaching the English. West-facing slopes are slightly more extensive. The longest and broadest pistes run north along the forest fire breaks to Turrach. The sportiest of them all are the red FIS ski slope with its Adrenalin variations – narrow runs following the cable car route, and Direttissima, whose goal is the black hang along the covered 6-seat Turrachbahn route. A little more relaxed than the FIS, is the Zirbenwald red route, which parallels the express chair lift of the same name. This also has an exceptionally relaxing blue variant, the Märchenwald. Rugged, winding, playful and honest red ski routes criss-cross the terrain around the Weitental ski lift and Sonnenbahn loveseats that rise directly by the Lake Taxi Rank. This is the place from which you depart for skiing while staying at Apartment Novak. 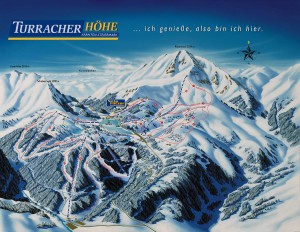